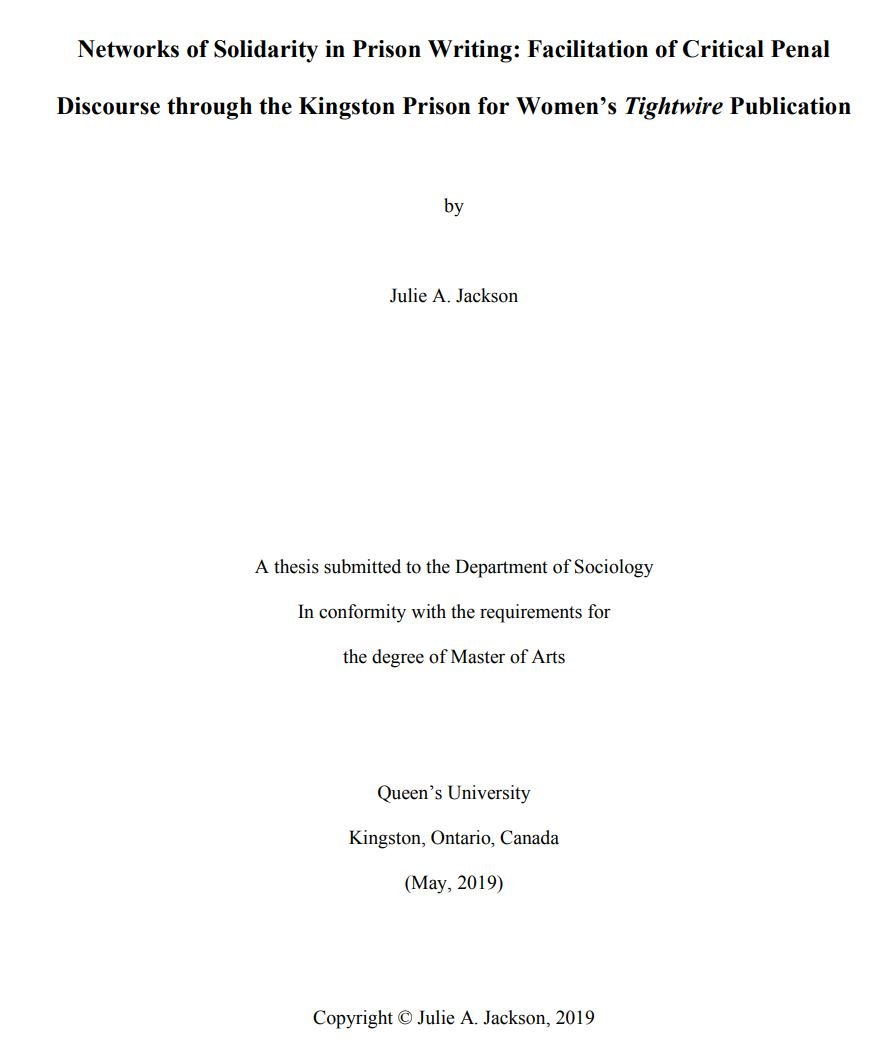 From the 1960s-1990’s, prisoners in both North America and abroad published interconnected journals through the Penal Press. Under this umbrella of publications, the women sentenced to the Kingston Prison for Women (P4W), the only federal penitentiary for female prisoners from 1934-2000, produced Tightwire: an enduring legacy of their lived experiences of incarceration.

Through a discourse analysis of Tightwire, this thesis examines the capacity of prison writing to facilitate critical penal discourse and to establish intersectional relationships of solidarity through collaborative understandings of carceral power.

Prison writing is discussed here using Mathiesen’s (1974) concept of the “Unfinished”, a contradictory and incomplete exemplar of political discourse. This term is used to describe the relationships among academics, activists, and prisoners prior to the 1970’s radical upheaval of Scandinavian prisons.

Because of its ability to form these social connections and engage simultaneously with a multiplicity of potential solutions, the unbounded discourse found in prison writing represents an alternative to mainstream hegemonic crime rhetoric, while also averting state integration and cooptation.

Disseminated through the Penal Press, Tightwire establishes strong connections with the women’s movement, between prisoners, and with Indigenous resistance to colonialism. By privileging diverse voices of dissent, Tightwire is representative what Day (2005) describes as the groundless solidarity characteristic of new social movements.

This solidarity is formed through a collective, discursive understanding of power relationships that reify penal institutions as the sole remedy to crime and violence. The gendered nature of penality that further entrenches racist, sexist, homophobic, transphobic, xenophobic, and ableist norms that permit social divisions under neoliberal capitalist nation state governance will be discussed at length.

Through the study of prison writing in general, and the profound solidarity evident in Tightwire specifically, it is possible to conceptualize of alternative responses to crime and violence.

Prefigurative relationships of mutual support born of the discursive engagement in prison publications defy cultural assumptions about punitive responses to criminality; the networks of solidarity formed of the act and exchange of prison writing demonstrate the necessity of unconventional relationships for inciting changes in the political consciousness and public discourse on the cultural functions and implications of prisons.